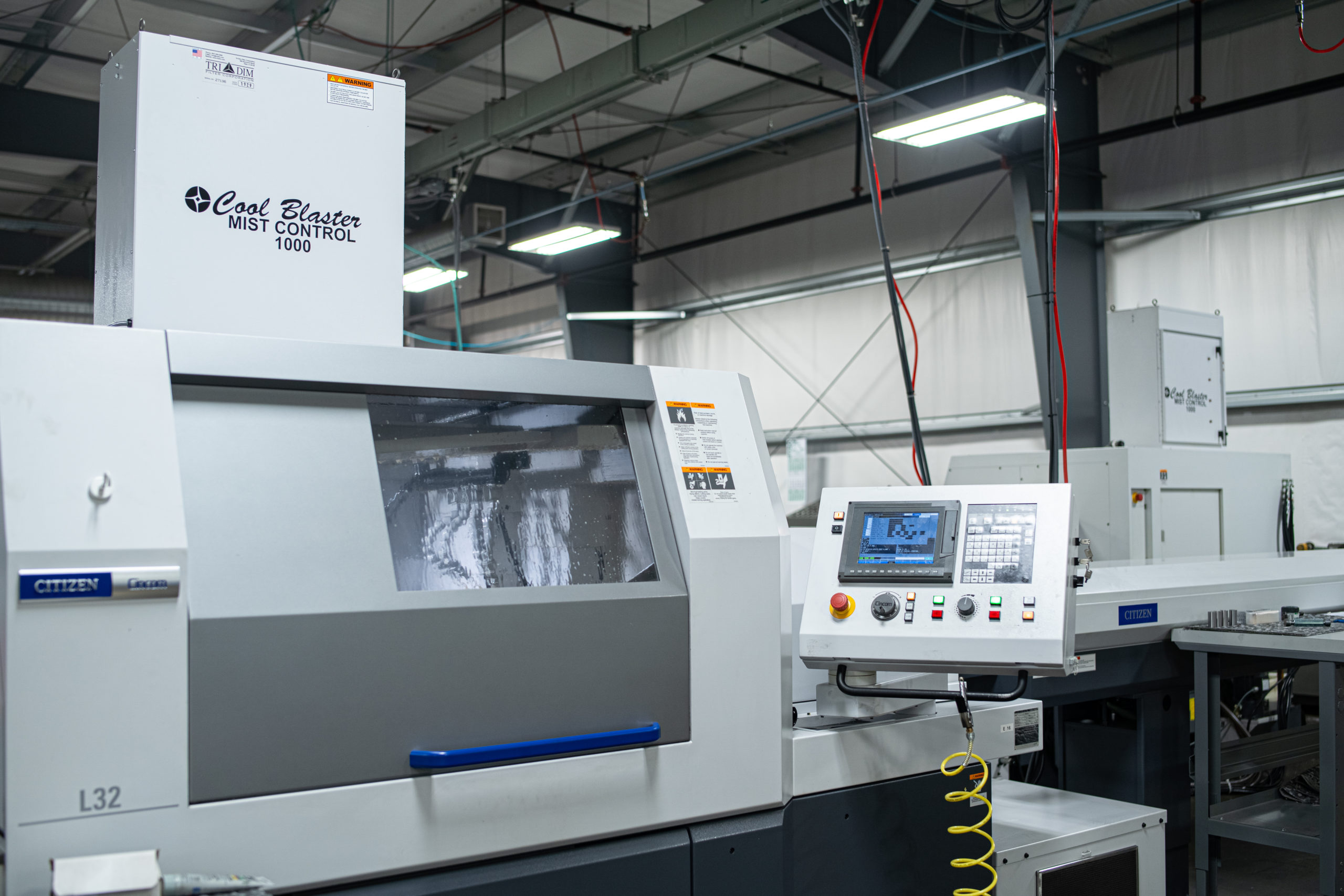 How do we keep our machine shop air clean? With electrostatic air filters, of course! The Cool Blaster Mist Control 100 unit is a 4-cell air filter controller that uses electrical static charge to attract and capture debris and particulate before they can cause any harm to our machinists. In this video, we run down some of our favorite benefits of the Mist Control 1000, and also some of the challenges we’ve faced personally.

Hey, I’m Brad with Kremin. Today we’re going to do a review and show you what we think about our Cool Blaster Mist Control 1000.

This is our Cool Blaster mist control unit. This is one of the ways we keep the air quality in our shop as good as possible.

This is the 1000 [model]. It’s a four cell unit. There is another unit that’s available in three cell, it’s called an 850. [Kremin] has some of those as well. They function the same way.

These are electrostatic air filters. What that means is they impart a charge to the filter itself, and also sometimes the particles that flow through them to pull particulate and debris out of the air.

It’s got a fan at the top. The fan at the top is what actually creates a negative pressure which is inside the machining housing area. It pulls the air with the debris in it up into the mist buster unit. As the air goes through it, the particles get magnetized or just get attracted to the filters. It pulls them out of the air and it blows clean air out the top.

As I said before, this is a four filter unit. One, two, three, four. At the tops and bottoms you can also see there’s some other mesh filters. All those are really for is to protect the main filters from having large particulate matter hit them. So these are really meant to be more of a baffle, just to knock down the heavy stuff before we start drawing really fine particulate out of the air.

Now I’m going to show you a little bit about how it actually functions in its use day to day. This is the on/off switch for the unit. It functions a lot like your stovetop on your oven. You have to turn it on. Initially, you should see these two indicator lights come on. If you have just barely turned it on, it’s on full blast. You might even be able to hear it right now because that fan is going pretty quick.

The goal with these units is to utilize the lowest fan speed possible. The slower the fan speed, the more time the air is in the chamber and able to have the particulate pulled out of it, the cleaner the air that comes out the top. Start way at the low end. If that’s enough? Good, leave it there. But on occasion you might be doing some sort of hard pass in a machining operation, that’s going to create more particulate, more mist than you would normally see. If it starts to build up, it’s going to escape through other routes in the machine. Maybe through some cracks in the paneling. A lot of times through a chip conveyor. Point is = you want to try and trap as much as that as you can in this unit, and not out in the open air.

Some other things to look out for: these are cleanable units. Because they’re cleanable, that means that at some point they are going to get so dirty they no longer function. When that happens you should start to see these lights start to flicker. If they’re flickering or altogether off, it’s probably an indication that you need to get your units cleaned.

Another way you can test them: you have these buttons on the front. These buttons are test buttons for each individual cell. When you push them you should hear a nice audible sound. You should also see the light flicker.

Here in front of me I have two example cells so you can see what I’m talking about with regard to the lights. This is actually a new shipment of [cells] that came in for us to swap. [Kremin] is on a 3-to-4 month cycle where we get new ones from the cleaning service. We send in our old ones, and they clean those, and then they go out to somebody else.

On my left is a brand new [cell]. On my right is an old one. As you can see, some of these baffles are extremely close together. Now these are charged in the system. Because they have an electrical charge running through them and particulate is getting pulled out and attracted to them, eventually that starts to build up. As those particles build towards each other between these baffles, eventually it’s going to make a connection. Once it does and it burns off, that’s when you’re going to see those lights flickering on and off. So you’ve got a connection established, burned off. Connection established, burned off. At some point they’re going to grow together to the point where it’s no longer going to be able to burn off any pieces and then you’re going to get a light shut off completely. This unit on my right would be a good example of one that’s trending in that direction. This would need to be pulled out, sent out and cleaned. You should be able to see the dirt and grime that’s starting to build on this.

Frankly, the cleaning is atrocious, difficult, and time-consuming. It’s not something you’re going to want to try on your own unless you’re going to dedicate resources to that job. Most the time it’s more beneficial to find an outside service that’ll clean them for you.

For our final review, I’m going to go ahead and give our Mist Buster *censored*

For our final review of our Cool Blaster Mist Control 1000 unit. We’ve had varied success with them. They are a good way to keep the quality management of your air and your shop as clean as possible, however they’re not without their downsides. #1: you do have to keep up on cleaning them, and it is not an easy thing to do and it’s extremely time consuming. Eventually you’re gonna do what we did. You’re gonna wanna move to an outside [cleaner] and that costs money.

There are other units available like the Mist-Fit 550 which is another unit we’re trialing. That would be like a traditional mechanical filter that’s just catching particulate and not magnetizing it in any way or attracting it with electricity. I don’t really know yet if those are going to be better, but what I do know is that you’re going to have to pay to replace those just like you’re going to have to pay to clean these.

The other downside of these: you can definitely overload them with too much particulate matter inside your machining area. You’re still going to get some [debris] coming out the top no matter how slow you move that fan speed down. Ultimately we’re a little undecided at the moment until we finish our experiment with the Mist-Fit 550.

I would give this a three and a half bananas out of five.”